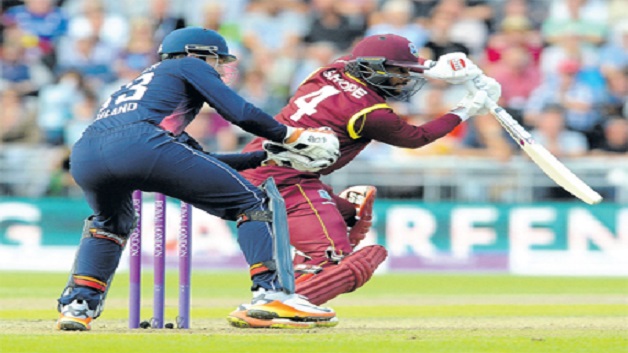 West Indies’ dismal One-Day International form continued with a seven-wicket defeat to England in the critical opener at Old Trafford in England yesterday, a result that condemned the Caribbean side to a 10-team qualifying tournament in order to reach the 2019 Cricket World Cup.

Needing to sweep the five-match series in order to achieve direct qualification for the showpiece, West Indies put themselves under pressure when they could only muster 203 for nine in the contest reduced to 42 overs per side following a two-hour delayed start due to a wet outfield.

Captain Jason Holder top-scored with an unbeaten 41 off 33 deliveries while, opener Chris Gayle, in his first ODI in two years, scored 37 off 27 balls.

Stylish right-hander Shai Hope carved out an attractive 35 while Rovman Powell got 23, but no other Windies batsman passed 20.

The defeat was the 16th in the last 21 ODIs for West Indies and their 12th loss in their last 17 outings to England.