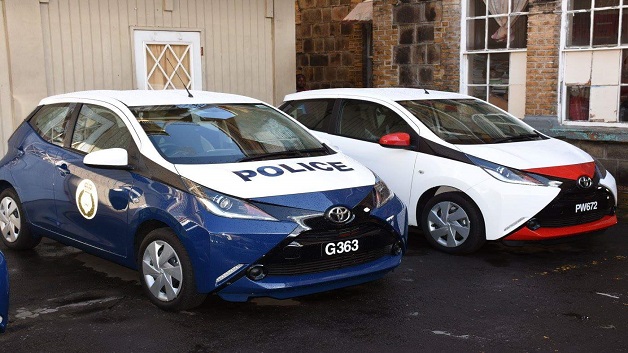 The cars valued at EC $90,000 each, were handed over at a ceremony held at the Central Police Station, in Kingstown.

In his welcoming remarks, Acting Deputy Commissioner of Police, Mr. Colin John, expressed gratitude on behalf of Prime Minister Dr. Ralph Gonsalves and Permanent Secretary in the Ministry of National Security, Mr. Godfred Pompey, to Monspace for their generous gift.

According to John, the cars were timely and absolutely necessary. He explained that they will be distributed to the Traffic Branch, Major Crime Unit, and to the Port Elizabeth Police Station, among others.

The Deputy Commissioner of the RSVGPF urged Police Officers who will use the cars to drive with due care and attention. There will be quarterly inspections of the vehicles and Officers will be trained to drive defensively, according to John.

Mr John said he is aware of the perception that the RSVGPF does not care for its vehicles. In reference to this, he commended the RSVGPF Band for caring for their bus for the last 17 years and the Fire Department which has two trucks for around 20 years.

He hoped that the vehicles will enable the RSVGPF to “properly police the population of St. Vincent and the Grenadines. Mr. John also expressed gratitude to the Speaker of the OECS House of Assembly, Hon. Ms. Rene Baptiste, CMG, who took the initiative to ask Mr. Too for the donation.

Mr. Too has promised the RSVGPF a further donation of 20 electric motorbikes should they keep their promise to maintain the cars entrusted to them.

Meek Mill Diss Drake again over “Back to Back” beat