Julius Alexander Williams. Hey, that name is way too formal, and complicated for the man we’re talking about here. ‘Jules’ will do…always. He’s not the ordinary man.

At the helm of WE FM, Jules has a most unorthodox management style. He oversees, seemingly, from the sidelines; and trusts his staff to get the job done without interference.

Jules believes “you get more out of people if they’re comfortable”. He invests in young full-time employees, allowing them to come into their own, molding their own identities, free from the influences of older models in the industry. “Don’t sound like anybody else. WEFM was not created to be an imitation.” That’s Jules talking.

The man is practical and assertive, perhaps dogmatic at times. What the workers at WEFM like most about their boss is that he is approachable. He truly listens. Mind you, Jules won’t hesitate to let you know you’re talking crap. But then again he’s wont mind if you reciprocate. Did we mention he was extraordinary?

His staff loves him. He’s funny, jovial and easy-going, yet beneath that relaxed demeanor is a shrewd businessman. Jules hates being the underdog, hence he’s ambitious and relentless in his pursuits. He’s nothing short of an electronic wizard, has always had a knack for the ‘technical’. By age ten, he had built his first radio. Jules Williams has utilized his solid electronic background to ace the rest of the field in radio.

WE FM offers the widest coverage, and does so on a single frequency, 99.9. WE FM is the child company of Williams Electronics, of which Jules is also Managing Director. Making music has also been a relaxant for Jules, and playing the keyboard to past-time after work led to the establishment of arguably the best band ever in St. Vincent and the Grenadines.

From 1986 the band Touch dominated the music scene for about a decade, with Jules as Manager and Sound Engineer. Remember his quest for excellence? Jules will boast that Touch has never lost a Road March Competition. Face it; the man’s a winner! A former Teacher and Hotel Manager joined We FM a couple months after its inception in 1997.

Miss Defreitas is a Director and the Operations Manager of We FM.

Putting it mildly, she is the axis around which everything else revolves at the station.

Her even temper and sobering demeanor endears her to the rest of the staff.

Miss Defreitas interfaces regularly with all functionaries at the Company. Naressa Bostwick joined WeFM in January 2011. She was born and raised in Guyana, then moved to St. Vincent in her early teens.

She is a past student of the Dr. J.P. Eustace Memorial Secondary School and the St. Vincent and the Grenadines Community College Division of Arts Science and General Studies.

As the Secretary, she assists in the day to day operations of the business.

In her spare time Naressa enjoys reading and gardening. Kheron is a very talented young man who plays the pan and keyboard. He attended the St.Vincent Grammar School and then the St.Vincent and The Grenadines Community College Division of Technical and Vocational Education.

He joined the WEFM staff in 2013. He is the Production Manager/IT Personnel. He enjoys playing football in his spare time.

Kheron enjoys all genres of music and he believes that there is music to fit every occasion.

He hopes to become an IT Technician as he wants to pursue his studies in that field. ([email protected]) Lindel Matthews, affectionately known as “DJ Maka” hails from Campden Park and is no stranger to Radio and has the appreciation and love for all genres of music.

He is not just cool and collective but is a big fan of sports.

Outside of work DJ Maka enjoys entertaining his fans at various functions like parties and weddings.

Catch him, Tuesday and Wednesday from 10 am to 2 pm.

Saturdays for Reggae Blast from 7 pm to 10 pm. 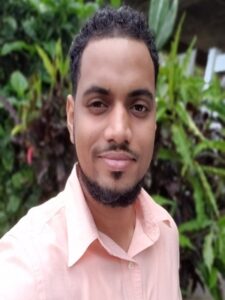 Rajiv joined the WEFM family in February of 2020 and considers the office of WEFM his home away from home. He attended the Thomas Saunders Secondary School and the St. Vincent and the Grenadines Community College, Division of Arts Sciences and General Studies. His love for reading at a young age has proven to benefit him during his time at the station so far as Assistant News Editor.

In his spare time, he enjoys sharing a good laugh with friends and family.

You can get yourself up to speed on the latest in local, regional, international and sports news with Rajiv during the Midday, 3 PM or Evening News. Kamall Archibald is more than just your typical man on radio with a sweet soothing sounding voice.

He’s also a musician, music producer a lover of different genre of music and loves to interact with his audience.

He’s no stranger to radio but Joined the WEFM family in 2009 as a part time announcer.

You can hear his voice Monday – Wednesday from 6pm – 10pm, Host of “Lift him Up” on Sunday mornings, Nigel Blake is a devout Christian, born into a strong religious family and is the son of Evangelist Verrol Blake.

He is a well grounded and focused young man both of a kind and gentle spirit.  He is a husband and a father of two daughters and enjoys spending time with his family. ([email protected])