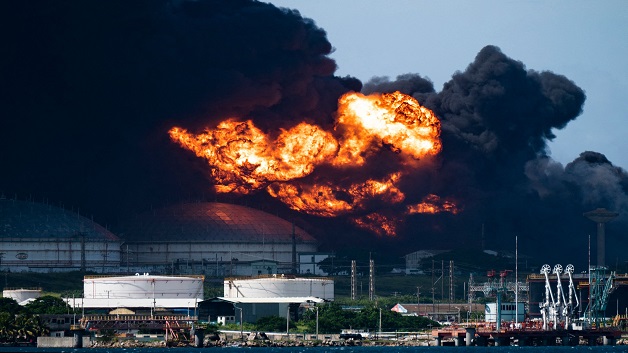 A deadly fire that began at a large oil storage facility in western Cuba spread Monday after flames enveloped a third tank that firefighters had tried to cool as they struggle to fight the massive blaze.

At least one person has died and 125 are injured, with another 14 reported missing ever since lighting struck one of the facility’s eight tanks on Friday night. A second tank caught fire on Saturday, triggering several explosions at the facility, which plays a key part in Cuba’s electric system.

“The risk we had announced happened, and the blaze of the second tank compromised the third one,” said Mario Sabines, governor of the western province of Matanzas where the facility is located.

Firefighters had sprayed water on the remaining tanks over the weekend to cool them and try to stop the fire from spreading.

The 15-member Caribbean Community (CARICOM) grouping on Monday expressed condolences to Cuba on the death of at least one person following the oil tank explosion in the industrial zone of the city of Matanzas.