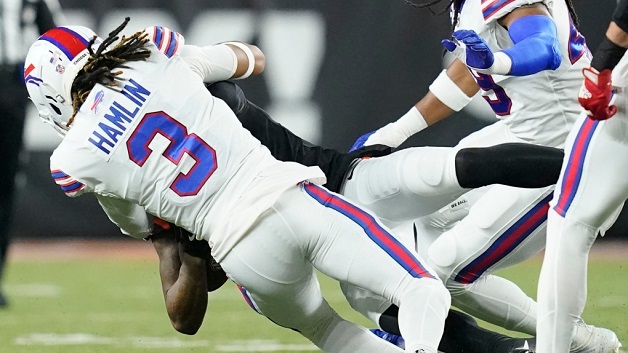 American football star Damar Hamlin is in a critical condition after suffering a cardiac arrest during a primetime US National Football League game.

The Buffalo Bills player, 24, fell to the ground after colliding with an opponent during the first quarter of a match against the Cincinnati Bengals.

He received on-field medical attention for more than 30 minutes before being taken to a local hospital.

The NFL suspended the game for the night about an hour after the incident.

His team, the Buffalo Bills later confirmed the cardiac arrest in a statement and added that his heartbeat was restored on the field.

The emergency sparked an outpouring of support for Hamlin and brought attention back to the dangerous nature of America’s most popular sport as the NFL season approaches its climactic play-off stages.

Hamlin was tackling Bengals receiver Tee Higgins in the stadium in Cincinnati,

Ohio, when Higgins’ helmet appeared to hit Hamlin in the chest. After initially getting to his feet, he fell on his back.

CPR and oxygen. Several were seen visibly distressed, with many kneeling to pray and some in tears.

Television coverage repeatedly broke away from the scene on the field, while the crowd in Cincinnati remained silent during the ordeal.

Jordon Rooney, Hamlin’s representative, wrote on Twitter: “His vitals are back to normal and they have put him to sleep to put a breathing tube down his throat.

They are currently running tests. We will provide updates as we have them.”

NFL games are rarely suspended because of injury. Commentators said the fact that gameplay had stalled was a sign of the shocking and severe nature of the emergency.

The two teams are among the top Super Bowl contenders this year, with their head-to-head coming in the primetime Monday night slot in the penultimate week of the NFL’s regular season.