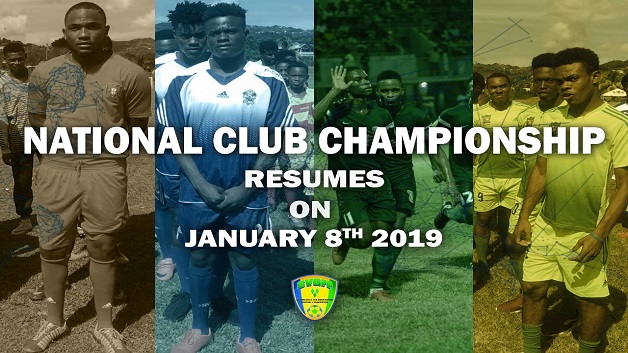 President of the SVGFF, Mr. Marvin Fraser said “since the championship began back in October of last year the support from the people, backing their favorite clubs and players has been phenomenal. He said that this was evident through the turnouts at the games, the talks around the communities and on social media. As for the second half of the championship, he anticipates an even greater turnout and excitement ,reason being “players from the various clubs who are training or aspiring to make the National Team are going to be putting their all on display to make the final squad to represent St. Vincent and the Grenadines”

Tuesday’s resumption will see matches in the first Division being played at the Sion Hill and Campden Park playing fields. Premiere Games will be played on Wednesdays, Fridays and Sundays at the Victoria Park. The resumption of the Club Championship will also see female football games on Wednesdays as a start to the female tournament which is scheduled to begin next week. The Club Champion is sponsored by the St. Vincent Brewery who has been lending their support to the development of the game.

US may close Cuba embassy after ‘attacks’ on diplomats