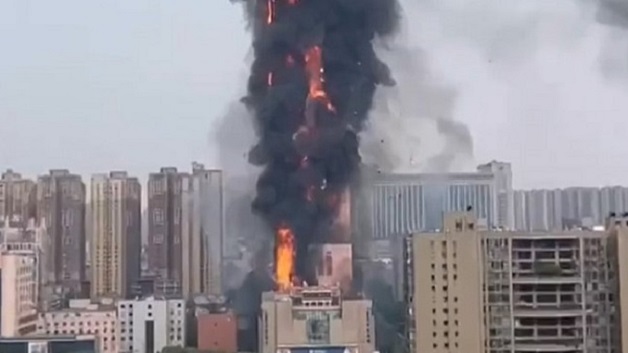 An enormous fire has engulfed a skyscraper in the Chinese city of Changsha, state media reports.

Footage posted on social media showed massive flames racing up the 42-storey building’s side as office workers rushed to evacuate the building.

Thick clouds of black smoke billowed out of the structure, which is a regional office for China Telecom.

Authorities said the flames have since been extinguished and that no casualties had yet been reported.

Images posted on social media showed fire fighters jetting water at the blackened facade of the 715ft tall structure in a race to put the fire out.

An entire side of the skyscraper appeared to be engulfed in flames at one point.

In another video, dozens of people could be seen fleeing the scene as flaming debris rained down from the skyscraper’s upper floors.

According to state media, the building was completed in the year 2000 and is positioned near a major ring road in the city of Changsha, the 10-million person capital of Hunan province, in south-central China.