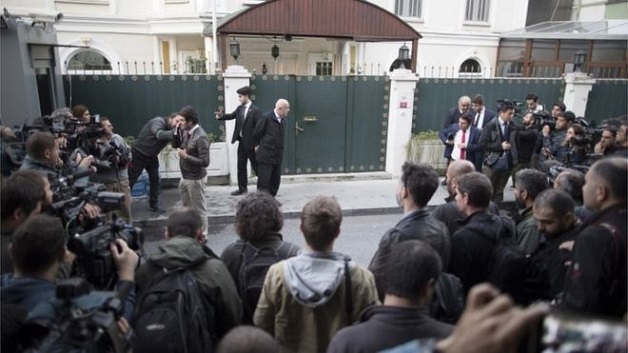 Turkey is widening its search for clues to the disappearance of Saudi journalist Jamal Kha-shog-gi to include the Saudi consul’s Istanbul residence.

The consulate itself, where Mr. Kha-shog-gi was last seen on October 2, was searched by Turkish investigators yesterday for the first time.

Pressure is growing on Saudi Arabia to give a full explanation of what happened to him.

According to BBC News, US Secretary of State Mike Pompeo has been meeting King Salman in Riyadh.

Turkish officials believe Mr. Kha-shog-gi was murdered by Saudi agents but the Saudis have denied this.

However, US media are reporting that the Saudis may be preparing to admit that Mr. Kha-shog-gi died as a result of an interrogation that went wrong.

Turkish police completed a search of the consulate overnight, after being allowed in by Saudi authorities.