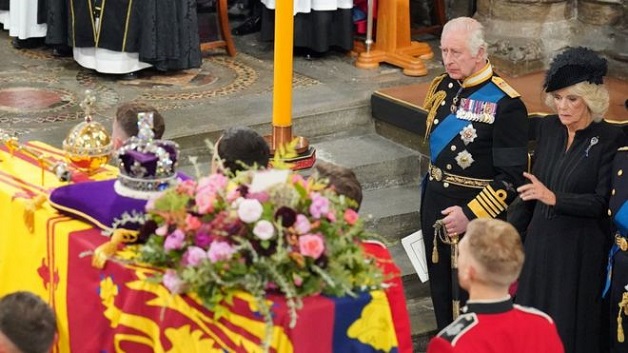 The Queen’s life-long sense of duty has been remembered in her state funeral service at Westminster Abbey.

The Dean of Westminster, who led the service, expressed gratitude to a congregation of 2,000 people including world leaders and royalty.

King Charles III led a sombre procession behind his mother’s coffin from Westminster Hall to the abbey.

The Queen’s coffin is now being driven to Windsor, where she will be buried with her husband of more than 70 years.

Once the procession arrives at the Windsor Castle there will be a smaller committal ceremony, before a private service for the family later in the evening.

As the abbey service came towards its end the Last Post was played – by the same musicians who performed it at the Duke of Edinburgh’s funeral – before the nation came to a standstill for two minutes’ silence.

A piper then played a traditional lament, before the King stood silently as the national anthem was sung.