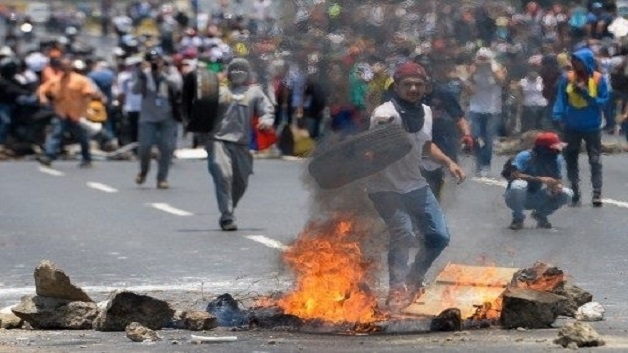 Venezuela erupted in a fifth day of violent protests in a week on Monday, as President Nicolas Maduro travelled to Cuba seeking support from fellow leftist leaders at a regional gathering.

In the latest clashes in the once-booming oil exporter, riot police in Caracas fired tear gas at stone-throwing demonstrators — whose leaders vowed not to let up the pressure on Maduro.

The streets of Caracas and several other Venezuelan cities have been the scene of running battles in recent days, with police deploying water cannons and firing tear gas and rubber bullets at demonstrators, who hurled rocks and Molotov cocktails.

Maduro is fighting efforts to force him from power over an economic crisis marked by severe shortages and the world’s highest inflation.

The crisis only deepened on Friday when authorities banned senior opposition figure Henrique Capriles from holding public office, thereby, blocking him from running against him next year.

The opposition is planning what they called the “mother of all protest marches” on April 19 against Maduro.

Pope Francis changes teachings of Catholic faith to oppose the death penalty in all...