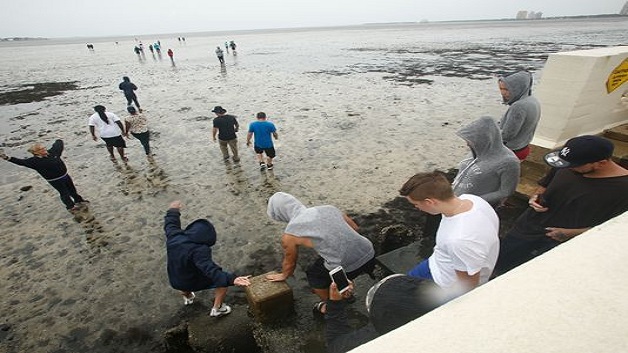 NASSAU, Bahamas (CMC) — Meteorologist Wayne Neely has sought to explain a situation that occurred during the passage of Hurricane Irma near The Bahamas last week when sea bed became visible.

Neely, who is also a lecturer on hurricanes, and recently released his 10th book titled, “The Greatest and Deadliest Hurricanes of the Caribbean and the Americas – The Stories behind the Great Storms of the North Atlantic,” said this is not the first time the phenomena has occurred here as the hurricane passed by Long Island, Acklins, and Exuma.

“Basically, there is a surplus of water at the centre of the storm and a deficit of water around the outer boundaries of the hurricane.

“This has happened before recently, but in my research, it has happened in Hurricane #5 of 1936 on the island of Acklins where persons went out and collected conch and fish that were stranded on dry land when the water receded out of the harbour near The Bight.”

He said in his publication, “The Great Bahamas Hurricane of 1929”, he interviewed the former Governor General of The Bahamas, Arthur D Hanna, who recalled growing up as a child on the island of Acklins and experienced a hurricane in 1936, where early that morning the water receded out of the harbour in The Bight, leaving all the boats stranded on dry land for several hours and by midday it came rushing back in.

“Others recalled going out on the newly exposed dry land and collecting fish and conch, which were left stranded,” Neely wrote.

The video which has had several hits on social media, shows where Hurricane Irma sucked up the sea and left the sea bed visible and almost dry.

Many people wrote they believed that the situation was the beginning of a tsunami and urged residents to seek safety at higher levels.

9 Nights of Lights Celebration to be held this weekend at the St. Vincent...