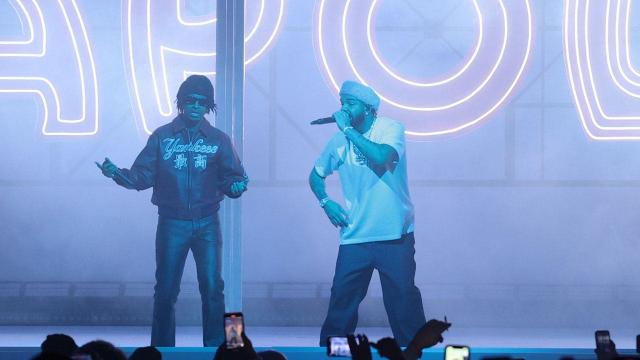 Drake’s first performance of 2023 was interrupted after a fan fell off a top-floor balcony.

Sunday’s event saw Drake stopping in the middle of his performance as someone came falling down from a balcony.

Reports are that the rapper was just welcoming 21 Savage to the stage to perform singles from their ‘Her Loss’ album when the incident happened.

Videos shared by attendees showed the moment a shoe came down while a body came next, with the person falling headfirst.

It’s not clear if the person is fine or how they came to fall off of the balcony. However, Drake appeared stunned and immediately paused the show in concern for the attendees.

Drake’s first performance for 2023 was at the Apollo Theater, where fans were treated to a very intimate performance by the rapper, who was mere feet away from fans. The event was produced and hosted by Sound 42 and SiriusXM on two nights back to back on Saturday and Sunday as Drake performed 41 songs from his extensive record-breaking No. 1 catalog.