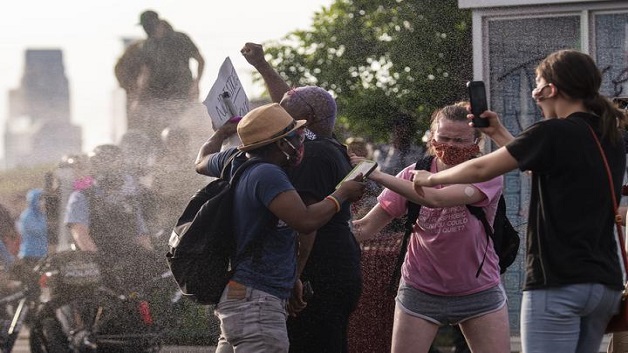 Police and protesters have clashed for a second night in the US city of Minneapolis after an unarmed black man died in police custody.

According to the BBC, tear gas was fired by police, while protesters threw rocks and sprayed graffiti. Businesses were also looted.

George Floyd, 46, died on Monday and video showed him gasping for breath as a white policeman knelt on his neck.

Four police officers have been fired, with the mayor saying that being black “should not be a death sentence”.

The renewed clashes on Wednesday came just hours after the city’s mayor called for criminal charges to be brought against the policeman who was filmed holding Mr Floyd.

There was also looting and vandalism, with some buildings close to the demonstrations being destroyed by fire.

The incident echoes the case of Eric Garner, who was placed in a police chokehold in New York in 2014. His death became a rallying call against police brutality and was a driving force in the Black Lives Matter movement.

A number of celebrities and athletes, including John Boyega, LeBron James, Beyonce, and Justin Bieber, have also weighed in, expressing outrage over the incident and condemning racism.

SVG up to date with payments to OECS Pharmaceutical Procurement Services says Minister of...