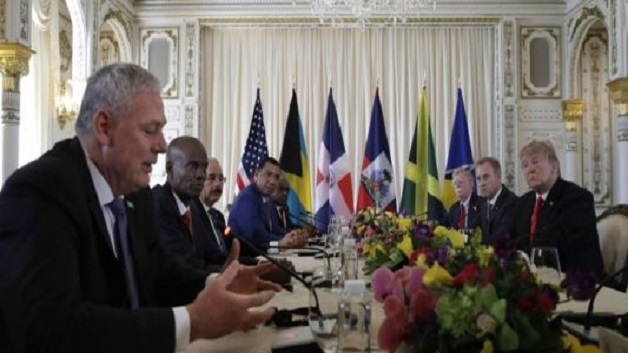 The multi-lateral meeting with five Caribbean leaders, including Prime Minister Dr. Hubert Minnis, and U.S. President Donald Trump on Friday has exposed deep divisions among CARICOM members, with several prime ministers heavily criticizing the meeting that was not explicitly about CARICOM.

Antigua and Barbuda Prime Minister Gaston Browne even suggested his fellow prime ministers were “weak-minded” and treated like “servants”.

Trump invited only leaders from the Caribbean countries that voted with the U.S. in support of an Organization of American States (OAS) resolution to recognize Juan Guaido as Venezuelan president and not Nicolas Maduro.

Minnis joined the leaders of Jamaica, Haiti, St. Lucia and Dominican Republic in the meeting with Trump in Mar-a-Lago, Palm Beach, Florida.

In a statement addressing the meeting, the White House Office of the Press Secretary said the president would use the meeting “as an opportunity to thank these countries for their support for peace and democracy in Venezuela”.

Referring to the meeting in a Facebook post on Saturday, Browne said, “CARICOM must continue its sustaining position, by standing on principle without inducements, or fear of reprisals.

Maduro won the election, which has been heavily criticized by international observers.

Man dies after Retaining Wall collapses on him at Evesham