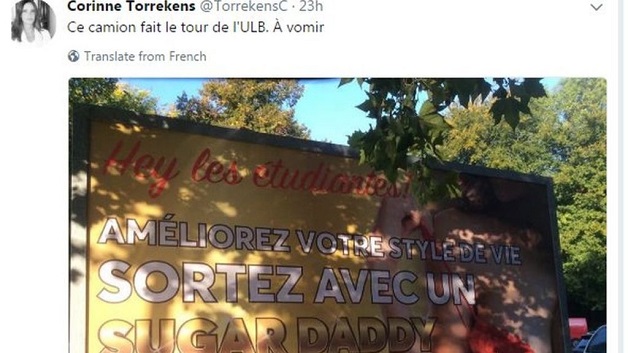 A website’s ad campaign telling young women they could fund their studies by dating a sugar daddy has provoked a wave of anger at Belgian universities.

Vans have been driven around universities displaying messages such as “Hey students! Improve your lifestyle” and “Zero euro student loan? Date a sugar daddy”.

Politicians and universities are taking legal action to stop the campaign.

The website involved is already under fire for an ad campaign in Norway.

Sugar daddy apps in the UK say they are already used by students, but authorities in Belgium and Norway have become alarmed at the tactics used by the website, Rich meet Beautiful, to attract young women.

As well as vans displaying suggestive posters, the website sent out press releases claiming it was aiming to sign up 300,000 Belgian members by the end of 2018.

The man behind the website, Norwegian Sigurd Vedal, told Belgian media that his website was not promoting prostitution at all, although he argued that money was part of every relationship.

ECCB to host a Retirement Symposium at the NIS