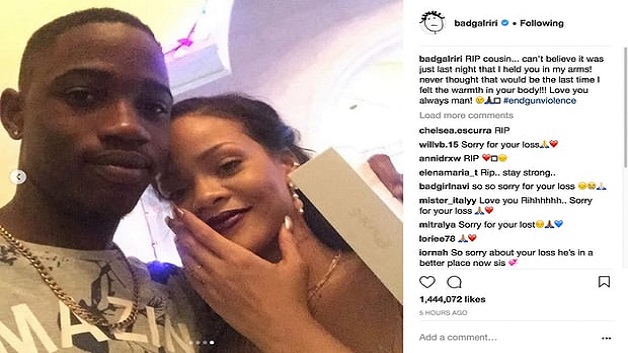 The Barbados born international singer, Rihanna, has called for an end to gun violence in her country after her 21-year-old cousin was shot dead on Tuesday night.

“RIP cousin… can’t believe it was just last night that I held you in my arms!” she wrote to her Instagram Tuesday. “Never thought that would be the last time I felt the warmth in your body!!! Love you always man!”

The 29-year-old singer ended her message by calling for an end to gun violence.

He was killed as he was walking through a track in the area of his house when he was approached by a man who shot him multiple times before fleeing the scene.

Alleyne was rushed to the Queen Elizabeth Hospital by private vehicle. He however later succumbed to his injuries.