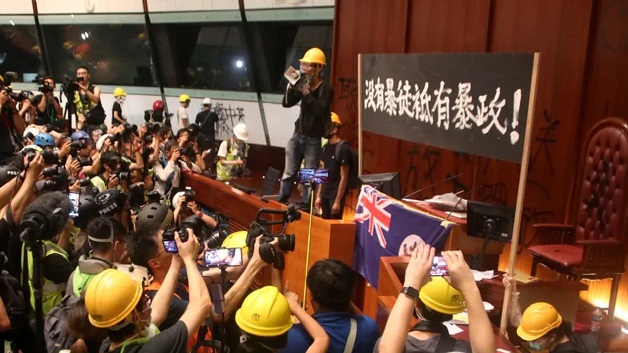 Protesters have forced their way into Hong Kong’s legislature – after besieging the building for hours.

The BBC said in a report, that dozens of demonstrators broke through the glass of the Legislative Council (LegCo) building – while a large crowd observed the unrest from outside.

Hundreds then entered the building, spray-painting messages on the walls and occupying the central legislative chamber.

The unrest is a breakaway part of a peaceful protest involving thousands.

Earlier, police held signs – warning they would use force if protesters charged the glass exterior walls. They later warned that anyone who breached an internal metal gate would be arrested.

This is the latest in a series of protests against a controversial bill that would allow extraditions to mainland China.

The government has agreed to suspend it indefinitely, but rallies continue amid calls for Chief Executive Carrie Lam to resign.

Pro-democracy demonstrators had taken to the streets on the anniversary of the city’s handover from UK to Chinese rule.