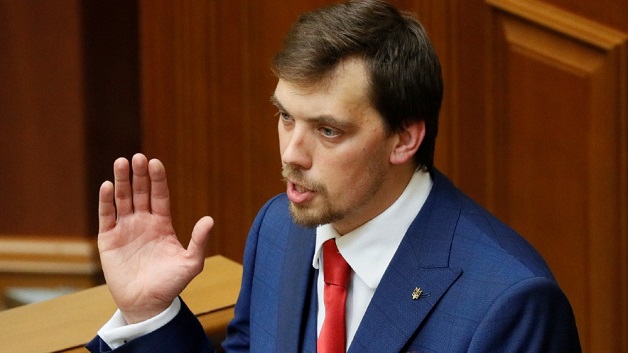 Kyiv, Ukraine – Ukraine’s embattled Prime Minister Oleksiy Honcharuk has tendered his resignation following a scandal over what appear to be leaked tapes of him lambasting the new, anti-establishment president’s “primitive” views on the economy.

A man whose voice resembles that of Honcharuk is heard in three audio files posted on YouTube this week, which claim to be the recording of conversations between the prime minister and finance officials, including the finance minister.

Honcharuk, a 35-year-old lawyer who became Ukraine’s prime minister in August, is alleged to have said “Zelenskyy has a very primitive understanding of the economy”, and is also heard describing himself a “layman” in economic matters.

Honcharuk submitted his resignation on Friday to President Volodymyr Zelenskyy, who said he would “consider” it, according to the latter’s office. The Verkhovna Rada, Ukraine’s lower house of parliament – dominated by Zelenskyy’s Servant of the People party – convened on Friday to discuss the scandal.

The party said it would accept the resignation if that was Zelenskyy’s wish.

But Zelenskyy postponed Honcharuk’s dismissal and instead instructed security officials to identify the source of the leaked recordings.

“I demand that within two weeks, as soon as possible, we should get the information on who was recording,” he was quoted by his press service as saying.

Law enforcement agencies should “find who did it and work it all out,” he said.

Addressing the parliament, Honcharuk said there had been attempts to sow distrust, but called for unity to prevail.

“Ukraine’s government keeps working as usual until the moment the president makes a decision,” Honcharuk told the parliament.

“This is a political decision we are expecting from our political power.”

Some of the legislators shouted “get away!” after his speech.

After submitting his resignation, the prime minister suggested unnamed powerful figures stood to benefit from his government being brought down.

“Many groups of influence, which are trying to gain access to financial flows, benefit from such presentation but this is not true,” Honcharuk wrote on Facebook on Friday morning.

“I came to this post to execute the president’s programme. He is for me a model of openness and honesty. However, I wrote the resignation letter to the president with the right to submit it to Parliament to cast away any doubts of our respect and trust to the president.”

According to Ukraine’s constitution, only a parliamentary vote can dismiss a prime minister.

Honcharuk said on Friday the recording had been “doctored”, cobbled together from fragments of recorded government meetings.

“Its contents artificially create the impression that my team and I do not respect the president, who is our political leader,” Honcharuk said on social media.

He did not comment on whether it was his voice heard in the recording, but on Thursday said the furore would not “scare” him, as his government would be “even more stubborn in uprooting corruption and blocking the streams” of illegal financial operations.