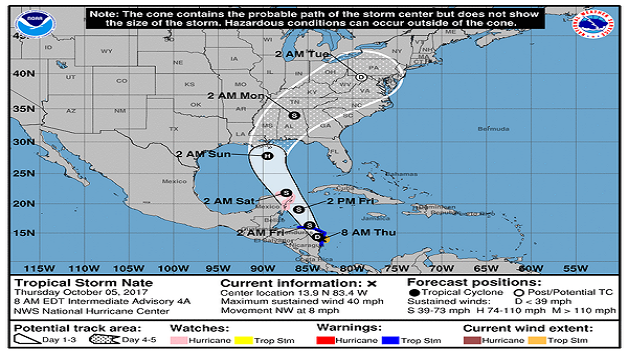 Tropical Storm Nate, which strengthened early today from a tropical depression in the Caribbean, continues to drench Central America with heavy rain.

The storm is on track for a likely U.S. landfall between southeast Louisiana and the Florida Panhandle on Sunday, likely as a hurricane.

“Nate is forecast to reach the northern Gulf Coast this weekend as a hurricane, and the threat of direct impacts from wind, storm surge, and heavy rainfall is increasing,” the National Hurricane Center said.

As of 11am, Nate was about 30 miles northwest of Puerto Cabezas, Nicaragua. The storm was moving northwest at 9 miles per hour, packing maximum sustained winds of 40 miles per hour.

Nate is expected to approach the east coast of the Yucatan peninsula late on Friday.

The hurricane center said a hurricane watch was in effect for a northeast portion of the Yucatan Peninsula while a tropical storm warning is in effect for portions of Nicaragua and Honduras.

Venezuela to hold landmark vote as it seeks to end crisis