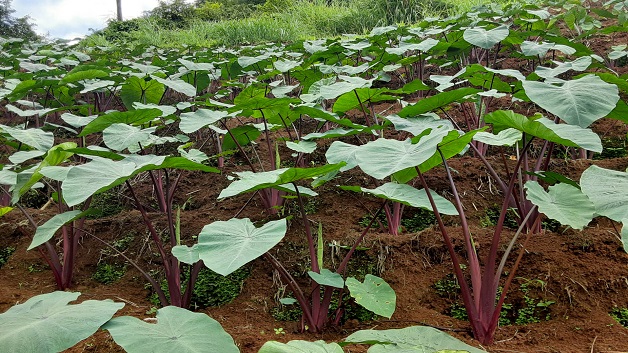 During the month of July 2022, Agricultural Officer, Mr. Donawa Jackson along with his technical team, Mr. Alston Lynch and Patricia Swift conducted a Dasheen Adoption Survey in Agricultural District 5 East within Agricultural Region 2.

According to an official release from the Ministry of Agriculture, the main objective of the survey was to determine factors associated with increased adoption or cultivated acreages of two Caribbean Agricultural Research and Development Institute (CARDI) introduced dasheen cultivars, namely Somoa (green petiole) and IND512 (red petiole).

The Ministry says that these two cultivars were selected as best performers from among twenty-five (25) cultivars after a series of research evaluations and farm trials from 2010 to 2014.

Farmers who were interviewed for the survey were randomly selected from the main dasheen growing areas of Maroon Hill, Bahamia, Hopewell, Montreal and Francois.

After completion of statistical analysis of the quantitative and qualitative data from survey respondents, the findings indicate that the factors associated with increased adoption or increased cultivated acreages in 2022 of the new dasheen cultivars are as follows:

2. Higher yields as is evident by larger corm sizes,

5. Market outlets both locally and regionally by local vendors and inter-island traders,

6. Less susceptible to pests and diseases such as aphids, mealy bugs, moulds and phythopthora,

8. Suckers can be removed from mother plants for planting without adversely affecting the plant growth and yield.

Some respondents indicated that they will not entirely replace the two (2) local or traditional dasheen cultivars grown, but will over time reduce their acreages with the new introduced cultivars.

In conclusion it is recommended that new cost of production be done for these new cultivars to determine yield per acre and profit margins.

Also, the provision of tissue culture planting materials for farmers who want to get into production and those willing to increase acreages. All this should be done taking into consideration local, regional and international demands to reduce under or over supply.