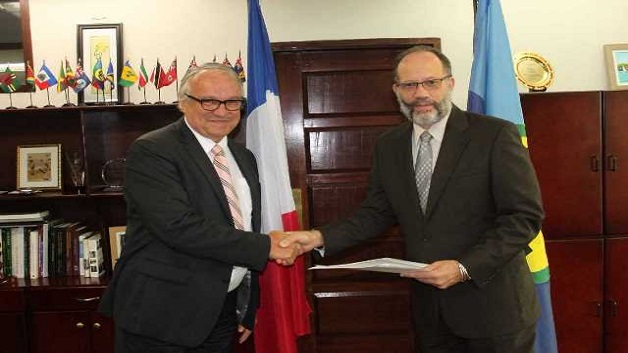 CARICOM strongly objects to the recent labelling of some of its member states by the European Union as Non-cooperative tax jurisdictions, CARICOM Secretary-general Irwin LaRocque said on Wednesday.

He was at the time accrediting a new ambassador of France to CARICOM, Antoine Joly, at the CARICOM Secretariat in Georgetown, Guyana.

The secretary-general urged France to leverage its influence for the EU to desist from “taking such arbitrary and punitive actions against,” those CARICOM member states it had blacklisted. Those countries, he emphasized, have not been so labelled by the relevant regulatory authorities such as the Financial Action Task Force and the OECD Global Forum.

“This decision by the EU has been based on new and unilaterally-determined criteria, that go beyond the generally accepted international tax transparency and accountability standards which our countries have been diligently meeting over the past several years,” he stated.

“CARICOM strongly objects to this listing of our member states and calls on the EU to remove our member states from this pernicious list,” he added noting that the Community stood ready to discuss this matter with the European Council.

3 Jamaicans among 5 busted for drugs aboard Guyanese vessel