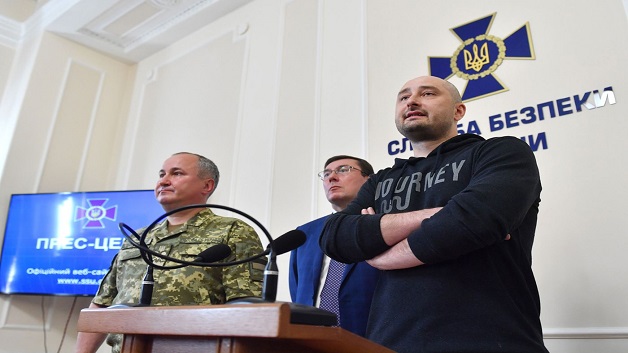 Russian journalist Arkady Babchenko, widely reported to have been assassinated in Kiev, Ukraine, yesterday, is alive and well.

Mr. Babchenko, a high-profile critic of the Kremlin, appeared at a press conference on Ukrainian TV today.

The head of Ukraine’s security services, Vasyl Hrytsak, told reporters the “murder” had been staged to expose Russian agents.

It was not immediately clear exactly how the fake murder was staged.

The journalist was reportedly found by his wife bleeding at the entrance to his block of flats, shot several times in the back, and died in an ambulance.

He apparently did not tell his wife that the murder had been staged.

A well-known Kremlin critic, Mr. Babchenko fled Russia in 2017 after receiving death threats over a post he made on social media.

The Russian foreign ministry said in a statement it was happy that Mr Babchenko was alive.