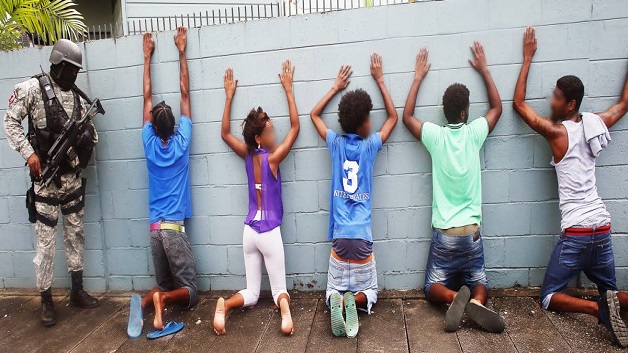 Trinidad and Tobago’s Commissioner of Police Gary Griffith issued a stern warning to those involved in the drug trade yesterday while speaking to reporters outside a Westmoorings apartment complex which was the target of a sting operation by the Special Operations Response Team (SORT).

The raid, which began shortly before midday, ended with the arrest of two men and two women at the Regents Gardens townhouse complex, East Sunset Drive. Police had received information that occupants of a unit there were involved in drug-trafficking.

Griffith, who coordinated the exercise, confirmed a fifth man was arrested when police intercepted his black BMW sedan a short distance away. He was taken to the Four Roads Police Station.

Speaking with reporters outside the apartment, Griffith said the raid was testament to his intention to root out criminals regardless of their social standing, ethnicity or geographic location.

“I have never known (the neighbourhood) to be on the police service agenda, but regardless of who the individual is, whether it is white-collar crime or any kind of collar crime, regardless of political affiliation or where they live, it is irrelevant to me. If you break the law I will deal with it. My message to drug traffickers and drug dealers in TT is this…happy hour is over.”

While the exact value of the drugs has not been confirmed, Griffith gave a cautious estimation of over $10 million, describing the amount as a “massive quantity.” Griffith also denied reports on social media that one of the suspects had co-operated with the police by providing information, saying, “No one held has co-operated in this operation.

No increase in VAT to be announced when the 2016 Estimates of Revenue and...