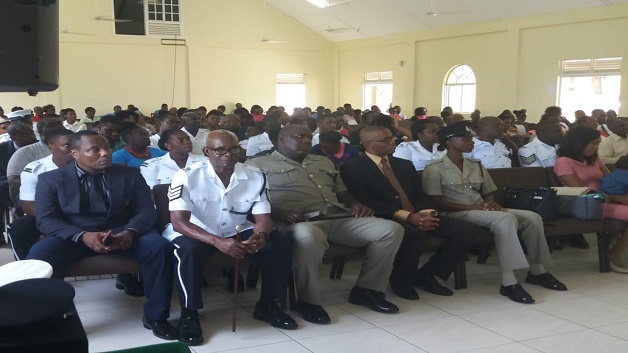 Hundreds of Police Officers attended church services throughout St. Vincent and the Grenadines yesterday May 27, 2018 to officially launch Police Week of Activities 2018.

In delivering brief remarks at the Church of the Ascension, Acting Commissioner of Police Mr. Colin John stated that his contingent were very happy to be worshipping with the congregation.

The Commissioner echoed Sir Robert Peel’s, the father of modern Policing refrain “The Police is the Public and the Public is the Police”.

Commissioner John also used the opportunity to covet the prayers of the church for police officers and their families, in order to fulfill the mammoth task of policing in St. Vincent and the Grenadines.

Meanwhile, today a number of Community Outreach Projects are being held including refurbishing the community bath and mural painting in Redemption Sharpes; erecting two goal posts at the Ottley Hall Playing Field, donation of over 10 food baskets to the needy in different police districts, free Haircuts and eyebrow shaving and free breakfast at Central Police Station and Beach cleanups on the windward and leeward side of the country in conjunction with the Central Water and Sewerage Authority (CWSA).

Ministry of agriculture to establish germplasm bank in an effort to conserve breadfruit species...