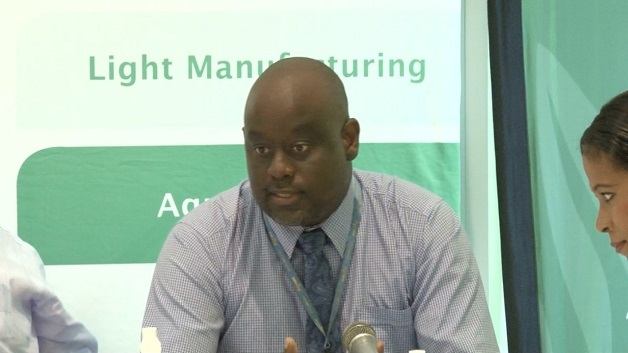 Chief Executive Officer (CEO) of the Argyle International Airport (AIA) Hadley Bourne has highlighted the rendering of quality service as a priority area for the airport.

This was highlighted on Saturday July 28, 2018 at the Argyle International Airport during the signing of a Memorandum of Understanding (MOU) with Kayan Aviation Holdings for the construction of a Fixed Based Operations (FBO) and Commercially Important People (CIP) lounge at the airport.

The MOU was signed by Mr. Bourne and Dr. Uday Nayak of Kayan Holdings Limited.

Mr. Bourne thanked Annette Mark CEO of Invest SVG for the work done in pushing and promoting the project and is looking forward to AIA now having the best Fixed Based Operations facility in the region.

Bourne said he was holding Dr. Nayak to having the CIP up and running by the winter season as some of the major airline players especially American Airlines which would begin direct flights to the island starting in December have clientele who are quite interested in this type of service.

He said he was glad that investor confidence had returned to AIA.

“There was a lot of uncertainties surrounding the airport in its initial stages and having foreign investors show that there is viability in AIA, really shows that we are doing the right thing just 18 months into operations and I am looking forward to the partnership, a long term partnership”.

Bourne added that the CIP would be an added plus to the facility and stressed that one of the things they want to drive at Argyle is that although it may be small in terms of size compared to some of its neighbours, providing quality service is a priority.

The investment is valued at approximately seven to eight million US dollars.

Newly Renovated Bequia Hospital to be opened this week