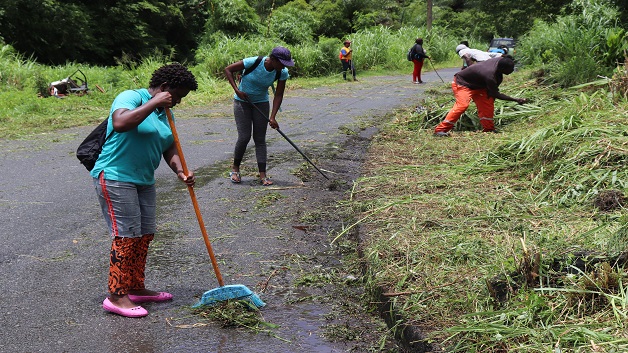 The 7-day programme will see the employment of 5,405 persons. These will include 450 gangs, and 905 Jobbers. In addition, over 100 Truckers will be employed.

Communications Officer of BRAGSA, Mr. Rohan Cupid says the gangs were out from 7am in every district across St. Vincent and the Grenadines.

He says emphasis will be placed on the cleaning of drains, following the heavy rains in recent weeks.

Mr. Cupid says this is being done as part of BRAGSA’s continued effort in the fight against Dengue Fever in St, Vincent and the Grenadines.

In October, BRAGSA launched an initiative dubbed the “Fight Against Dengue Fever” which also took the form of a road cleaning programme.

This year’s Christmas Road Cleaning Programme will be carried out at a cost of 2.5 million EC dollars.

Protests in Gaza ahead of Trump’s US-Israeli plan release

West Indies collapse to 134 all out in opening day of first Test against...