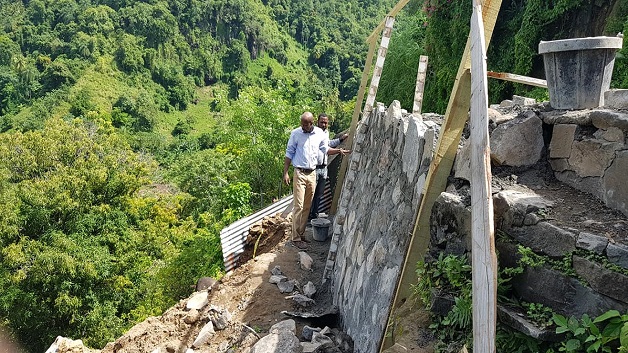 Commuters and motorists on the North Leeward Highway can expect improvements to the road network as work has commenced on several pieces of retaining wall on the Coull’s Hill Road.

Amidst continued safety concerns the government agency, the Roads, Buildings and General Services Authority (BRAGSA), is aggressively pushing to have the stabilization works completed by year end.

The work is seen as a temporary measure ahead of the larger proposal for slope stabilization and realignment works for the area.

Yesterday a team from BRAGSA along with Senator Carlos James conducted a site visit where construction work is rapidly advancing.

The compromised embankment at the Coull’s Hill site has been a major concern to motorists in North Leeward.

During the site visit Coull’s Hill villagers and commuters expressed gratitude to the government for several improvements to the road network in North Leeward.

Duo charged over $18,000 in fines for possession of 79 pounds of cannabis