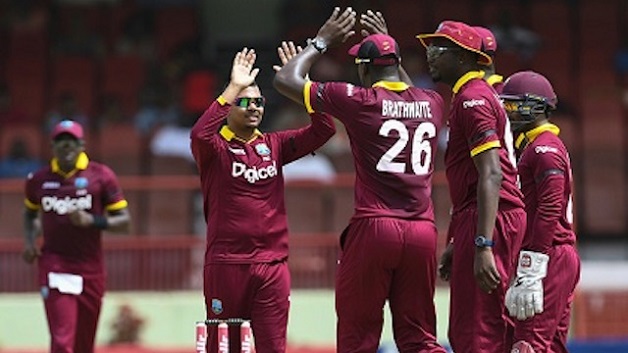 West Indies’ hopes of an automatic World Cup spot suffered yet another blow when they slid even further in the latest ICC One-Day International rankings released on Monday.

The Caribbean side remained ninth in the rankings but lost four ratings points to slip to 79, falling further behind eighth placed Pakistan in their race for a top eight place in order to qualify for the 2019 World Cup in England.

Hosts England and the next seven highest-ranked sides at the September 30 cut-off date will qualify for the showpiece.

With their latest slide, the Windies are now nine points adrift of Pakistan who dropped two points in the latest rankings.

The two sides met recently in a pivotal three-match one-day series with Pakistan emerging winners by a 2-1 margin.

Two-time World Cup champions West Indies are running out of time to improve their ranking with series against minnows Afghanistan in June and England in September remaining.

Should the Windies fail to qualify automatically, they will enter a 10-team qualification tournament in an attempt to secure one of the two remaining World Cup berths.

South Africa and Australia, meanwhile, have remained top of the ODI rankings, with the Proteas gaining four points to move up to 123 and the Aussies remaining stagnant.

India, meanwhile, have gained five points and replace New Zealand in third place with the Black Caps dropping to fourth.

England lie fifth on 109 points, Sri Lanka are sixth despite dropping five points while Bangladesh are seventh on 91.

Oswald Robinson re-elected President of the St. Vincent and the Grenadines Teachers Union

Meek Mill threatens Drake “Bullets for you and the whole OVO”