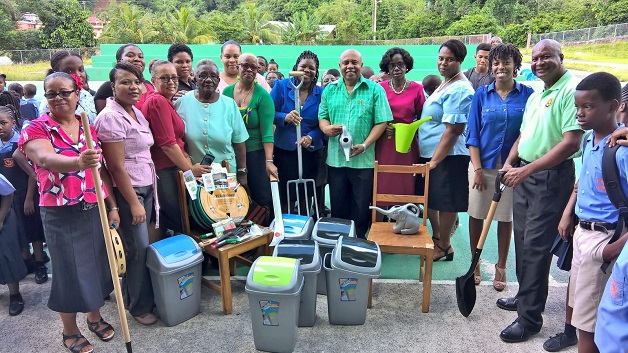 Phase One, of an initiative spearheaded by Cecil McKie, Parliamentary Representative of the Constituency of West St. George to provide the necessary Agriculture package to all five primary schools and lone secondary school in the constituency, has been completed.

The Agricultural packages included several trays to facilitate the germination of seeds, several packs of a variety of vegetable seeds, drums to accommodate the transfer of seedlings in areas where land is limited, garden implements to assist with early preparation and ongoing maintenance of the plots, a hose and watering cans and tools to prepare and maintain land plots.

The objectives include: having the schools grow what they eat in their food kitchens, introducing the students to the concept of doing their own back yard gardens at home, and educating the students on the viable option of doing farming as a career after school, given the development of the Tourism Sector and new export and marketing Agricultural enhancements and possibilities and the issues of food security for Vincentians.

The Agricultural initiative by Minister McKie was complemented by the donation of a wide range of items which was based on a wish list provided by each school.

McKie will turn his attention to outfitting all five primary schools to have them participate in the Asco Netball Competition in a Division called the West St. George Primary Schools Netball Development Festival.

This Festival will run over the months of November and December 2017 and will lead into the West St. George Primary School Cricket Festival from January 2018.