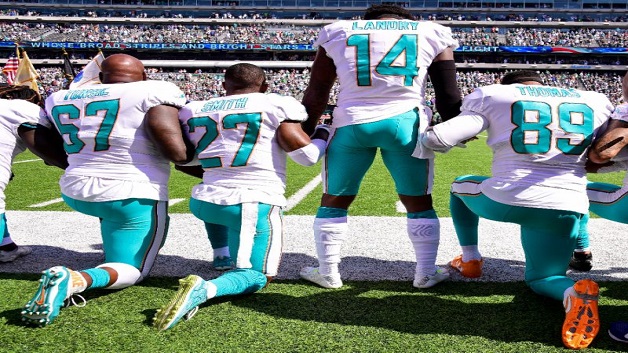 A wave of protests swept across the National Football League (NFL) on Sunday as President Donald Trump escalated his feud with players who kneel during the US national anthem to draw attention to racial injustice.

Trump ignited a firestorm of criticism after comments on Friday in which he used a derogatory term to describe NFL players who chose to kneel through renditions of The Stars and Stripes. He added that such ones should be fired.

The US leader doubled down on those remarks early Sunday, urging fans to boycott the NFL as long as the protests continued.

Yet players throughout America’s most popular sport took a defiant stance on Sunday, in the largest such demonstration since former San Francisco 49ers quarterback Colin Kaepernick started the protests in 2016.

The first mass protest took place at the NFL’s London game between the Jacksonville Jaguars and Baltimore Ravens at Wembley Stadium, where a large number of players from both teams knelt.

Others stood with their heads bowed and arms interlocked, among them Jacksonville owner Shad Khan — who donated $1 million to Trump’s election campaign in 2016.

Sunday’s protests were the latest twist in a bitter war of words between Trump and US professional sports.

Eastern military forces have taken of town in Tripoli

Work on the South Leeward Highway suspended for Christmas holidays