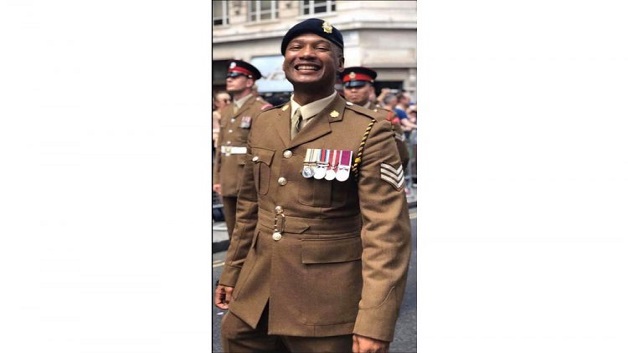 Vincentian national Sergeant Guy Fitzroy Oronde Lowe-Barrow, of the Royal Logistics Corps, is one of 64 personnel from the British Army who were recognized in the Queen’s New Year’s Honours List 2020, published in the London Gazette on December 27.

Sergeant Barrow has been appointed to the Military Division of the Most Excellent Order of the British Empire as a Member (MBE).

The British Army on its website was quoted as saying, “Many are being rewarded for going above and beyond; whilst tireless commitment, selflessness and compassion feature in citations adding that Leadership, welfare and humanitarian work have pushed soldiers and officers to excel on deployments overseas and at home in the UK.”

Lowe-Barrow, age 43, received his award for leadership in championing inclusion in the Army.

The 19-year veteran of the armed forces said the reality of being honored still has not sunk in. “It is a bit surreal, this MBE thing,” Lowe-Barrow told SEARCHLIGHT on Sunday adding that he never thought he would have been one of those persons with honorific post-nominals.”

He said the award is perhaps an acknowledgement and recognition of not just his work, but the work of people in his networks.