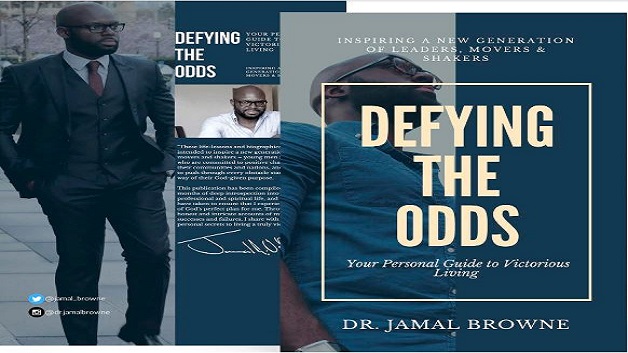 In his new book, ‘Defying the Odds – Your Personal Guide to Victorious Living’, Dr. Browne responds to thousands of requests for personal and career guidance from young professionals all across the globe, many of whom first learnt about his story back in 2016 through a viral post on the popular professional networking site, LinkedIn.

According to Dr. Browne, his post very simply used the example of his life and career to highlight the importance of taking extravagant leaps of faith when pursuing certain personal and career goals. Never did he imagine that within a matter of hours, thousands would have responded to his post, ultimately drawing the attention of over one million LinkedIn users worldwide.

“It is amazing how curious, talented and determined our youths are. The challenge is that there aren’t enough committed mentors to answer the myriad of questions that we all have about our personal lives and careers. So when the questions started being directed towards me, I immediately saw an opportunity to impart the lessons that I would have learnt thus far in my life and career. This book captures those lessons in a concise and compelling way,” said Browne, a 2016 Fellow of President Barack Obama’s Young Leaders of the Americas Initiative (YLAI), and a former United Nations Project Officer.

Born in the community of Murray’s Village, overlooking Kingstown – capital city of St. Vincent and the Grenadines – Dr. Browne was raised in a strict Christian household under the watchful eyes of his grandmother. He recalls developing an insatiable desire for new knowledge at a very early age, and attributes this to his family’s unwavering commitment to his education.

“I do not subscribe to the notion of one being self-made, as we all need someone who is willing to sacrifice something – whether time, energy or finances – to afford us a reasonable shot at success. That has been the story of my life,” said Browne who was officially awarded his Doctorate by the University of the West Indies in September 2017.

The four-part book has been divided into nine chapters, with the first two chapters – Part 1 of the book – taking readers on a compelling journey through the author’s early life and career, highlighting the roles of key individuals, institutions and environments that helped to shape his character, and nurture his talents. From his humble beginnings growing up in his tiny Caribbean village, to his induction as a United Nations Project Officer in Nairobi, Kenya back in 2014, Browne meticulously weaves his way through a series of life-changing experiences that ultimately charted his course.

According to Browne, chapters three through nine have been divided into three parts, and respond to the hundreds of questions posed to him over the years by young adults and young professionals from all across the globe – most of which follow common themes such as ‘Overcoming Fear’, ‘Financial Freedom’, ‘Finding the Right Field of Study’, and ‘Practical Christian Living’.

“There are days on which I find myself on the verge of tears with some of the stories and requests for personal and career guidance that I receive, and in light of my familiarity with some of these accounts. So in preparing this book, I was compelled to dig deeply into my own experiences to unearth those invaluable lessons and solutions that I found along the way,” said Browne as he reflected on the preparation of his maiden inspirational publication.

Copies of ‘Defying the Odds – Your Personal Guide to Victorious Living’ are currently available on Amazon Kindle and Amazon Books in both e-book and print versions, and according to Dr. Browne, this book is an ideal personal investment and gift item for young adults and young professionals currently navigating their way through major life and career decisions, or those simply in search of a more fulfilling life and career.

Mom shoots New Zealand man who flew to US to confront teen he met...