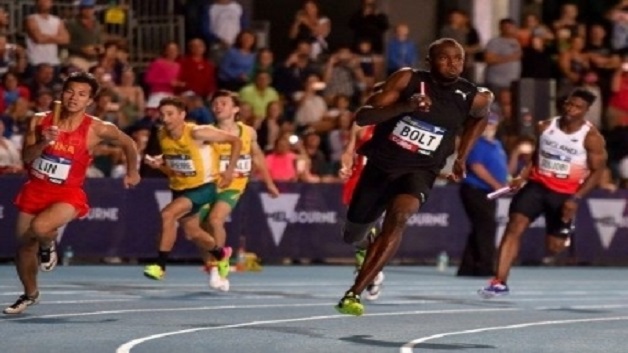 Usain Bolt led his All-Stars to victory in the second Nitro team athletics event today but it was mired in controversy with Australia docked points.

Needing only to take the baton around the track in the mixed 4x100metre relay, Australia blew their chance to top the night in the finale of the new concept at Melbourne’s Lakeside Stadium.

Jack Hale and Fabrice Lapierre botched the handover from second to third leg and Australia was disqualified.

After some initial confusion, Australia was given a score of -10, rather than the 40 points teams receive for finishing sixth.

As a result, the Bolt All-Stars — who won the race with Bolt running the third leg — finished with 930 points to Australia’s 895.

Bolt, the world’s fastest man, told reporters he was initially under the impression Australia had received 40 points for finishing last, regardless of their indiscretion, and vowed to protest. But meet officials reviewed the decision and ruled that a disqualification was appropriate.

In a bid to sell the concept globally, Bolt is fronting the All-Stars — including athletes from Jamaica, the US and Kenya — against teams representing Australia, England, New Zealand, Japan and China in the inaugural three-night event.

The All-Stars won last Saturday and after a slow start today came through again.

Prime Minister concerned about recklessness displayed by drivers on our roads