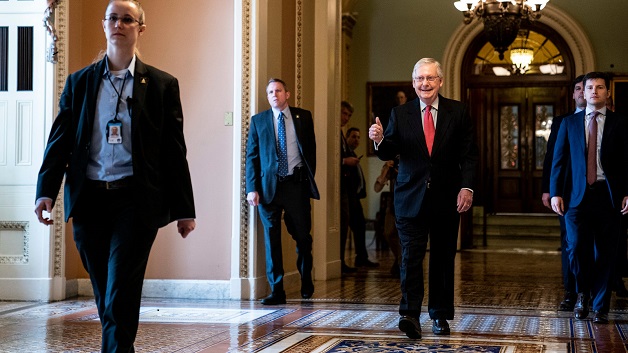 The US Senate on yesterday approved a historic, $2 trillion stimulus package to provide a jolt to an economy reeling from the coronavirus pandemic, capping days of intense negotiations that produced one of the most expensive and far-reaching measures Congress has ever considered.

In a remarkable sign of overwhelming bipartisan support for the legislation, the vote was unanimous at 96-0.

The legislation represents the largest emergency aid package in US history and the most significant legislative action taken to address the rapidly intensifying coronavirus crisis, which is overwhelming hospitals and grinding much of the economy to a halt.

It will next go to the House for a vote. House Majority Leader Steny Hoyer announced Wednesday evening ahead of Senate passage that the House will convene at 9 a.m. on Friday to consider the relief package. The plan is to pass the bill by voice vote, a move that would allow the House to avoid forcing all members to return to Washington for a recorded roll call vote.

President Donald Trump has indicated he will sign the measure and tweeted his congratulations after it cleared the Senate.

The White House and Senate leaders struck a major deal early Wednesday morning on the package. Senate Majority Leader Mitch McConnell formally announced the agreement on the Senate floor, describing it as “a wartime level of investment for our nation.”