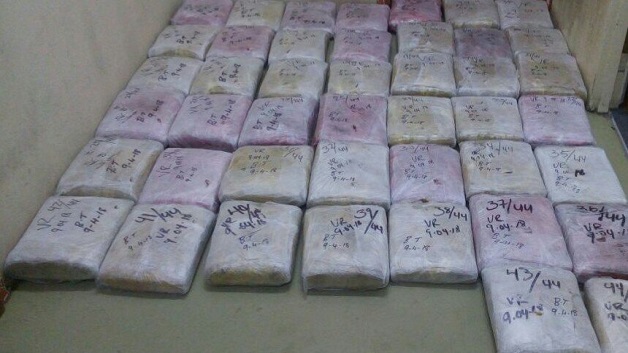 Over one million dollars worth of cannabis was seized at V.C. Bird International Airport in Antigua yesterday and two men have been arrested.

According to the Antigua Observer, officers from the Criminal Investigations Department, Narcotics, K-9 and Customs made the busts when they went to the Customs Cargo Shed and carried out two separate intelligence driven operations.

In one incident, the K-9 dogs detected a total of 249.5 pounds of compressed cannabis hidden inside two cardboard boxes which had arrived earlier on board Caribbean Airlines flight from Kingston, Jamaica.

According to a police statement, the substance, which has an estimated street value of $998, 000 was immediately taken to a police station, pending further investigations.

In the other incident, K-9 dogs detected four pounds of compressed cannabis hidden inside a cardboard box with baby wipes and adult pampers.

The substance was found inside the Amerijet detention room at Customs Cargo. That set was also taken to a police station. Police said it is worth $16,000.

Andy Murray knocked out of Wimbledon