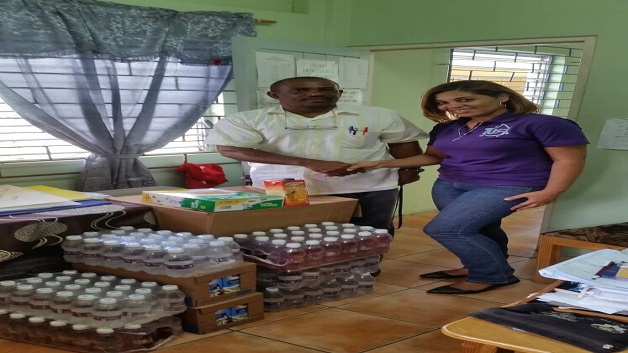 Since the start of the current academic school year, close to thirty-one thousand free nutritious breakfasts have been served to three hundred and ninety children in seventy-five schools throughout St. Vincent and the Grenadines.

And according to Tus-T CEO Dwight Hillocks: “We expect to serve almost forty-seven thousand breakfasts by the end of the academic school year when the last term ends.

“During the 2nd and last term of this academic school year, four of the seventy-five schools have been participating in a pilot with ten children in each school. Start Bright is testing what it takes to scale vertically from five children per school and are employing four women to prepare breakfast for these children.”

“One of the variables we are attempting to establish is the maximum number of children that a person can prepare food for within an hour. This includes, preparing, serving and cleaning up,” Hillocks adds.

Admitting that the current school year has presented what he describes as a “few speed bumps” not experienced in the pilot during academic school year, 2015 – 2016, Hillocks notes that these are not insurmountable, as possible solutions have been identified and will be further examined at an upcoming workshop with the teachers and principals of the 75 participating schools.

“We believe that the workshop will provide opportunities for Start Bright to improve the existing system during the 2017 – 2018 academic school year starting in Sept 2017,” notes the CEO.

Hillocks is also reminding the public that Tus-T is unable to ‘feed the children’ without its participation. He is grateful for the public’s continued support which has so far been able to sustain the breakfasts for three hundred and ninety-five children for forty days per term.

This, Hillocks contends is accomplished by everyone contributing to a meal, each time they purchase a bottle of Tus-T water. Tus- T is aiming to increase the number of children being fed from five to ten, or more in all participating schools.

The Tus-T CEO asserts that this will only be possible if households help to meet this challenge by committing to purchasing at least three bottles of Tus-T water per week.

Hillocks is projecting that once this can be accomplished, Tus- T can double the number of children that are currently being fed from three hundred and ninety-five to eight hundred, during the upcoming academic school year.

The primary focus of Start Bright is to provide these children with the means to start their school day on a full stomach, an ‘investment’ in the future of St Vincent and the Grenadines.

Hillocks has also announced plans for Start Bright Tus-T scholarships among other benefits that are in the pipe-line for the next academic year.

Russian journalist reported to have been assassinated in Ukraine, is alive and well

US suspends search for Haitian child suspected smuggler off Florida