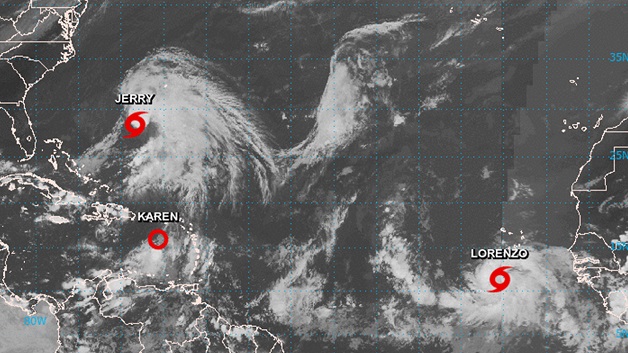 The former Tropical Storm Jerry became a Post-Tropical Cyclone Wednesday morning but is still considered dangerous with tropical-storm-force winds as it is is expected to pass very near Bermuda Wednesday afternoon, the National Hurricane Center said in its 11 a.m. update.

Jerry was downgraded after meteorologists identified a lack of convection stirring the storm’s winds.

A Tropical Storm Warning is in effect for Bermuda as Jerry contains maximum sustained winds of 45 mph. Jerry’s tropical-storm-force winds can be detected 140 miles from its center.

As of the 11 a.m. update, the storm is 120 miles away from Bermuda.
The storm is expected to bring 1 inch or less of rainfall across Bermuda tonight, and swells producing life-threatening rip current conditions.

The NHC predicts Jerry to gradually weaken after visiting Bermuda and moving northeast and possibly dissipate over the weekend.

Meanwhile, Hurricane Lorenzo continues to grow quickly in strength in the east Atlantic. The hurricane has maximum sustained winds at 85 mph, and is expected to become a major hurricane with winds of 115 mph over the next 36 hours.

The storm is about 640 miles west of the Cabo Verde Islands, and is expected to move northwest at a pace of 17 mph.