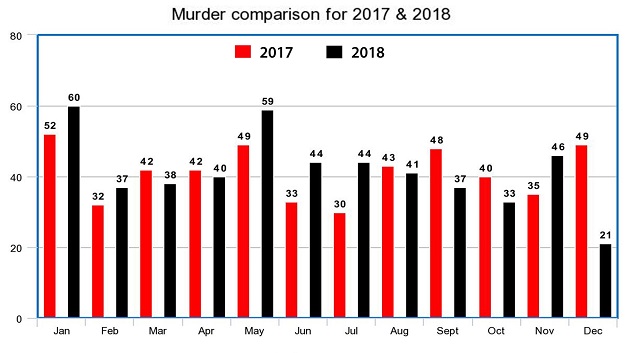 The murder toll in Trinidad and Tobago has hit 500 for the year after an unidentified man was killed in Montrose, Chaguanas, early this morning.

The man, who was dressed in dark clothing and had a knapsack on his back, remains unidentified.

Police said residents heard gunshots around 3:30am and passersby later found the body near the intersection of La Clave Street and the Montrose Main Road. There appeared to be a bullet wound to the head.

According to the Trinidad Guardian, this latest killing followed that of Lester Sookhai in Tunapuna on Tuesday. Sookhai, age 47, a Forestry Division employee, was reportedly killed during a dispute with another man in a neighbourhood parlour along Maingot Road around 10.30am.

This is the first time in nine years that the murder toll has reached the 500 mark. The highest toll to date was 542 in 2008 and a year later there were 509 murders recorded, but since then the rate had been kept under 500 until today.