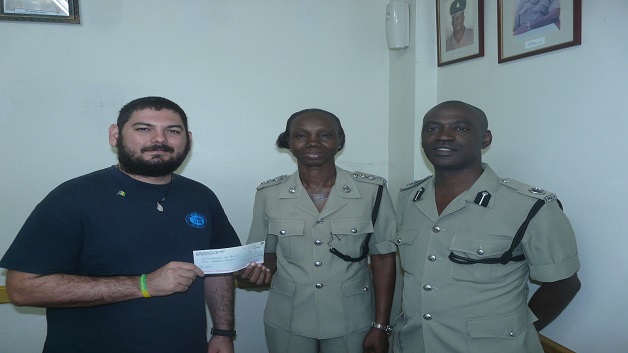 The Drug Abuse Resistance Education (DARE) programme of the Royal St. Vincent and the Grenadines Police Force in its quest to keep the nation’s youth on a positive path has received a timely donation from the T-Shirt Store.

Jason Moussa, proprietor of the T-Shirt Store, donated EC$2000 to the DARE programme at a handing over ceremony held at Police Conference Room at the Central Police Station yesterday.

Moussa, a beneficiary of the programme as he was a member when he was a student, said a number of crimes committed across St.Vincent and the Grenadines are carried out by youth and it was against this backdrop that he took the decision to start an initiative to assist the police in raising funds to encourage the youths not to gravitate to a life of crime.

Moussa noted that in November 2017, his business decided to donate a dollar from every t-shirt sold that month on retail to the DARE programme adding that he had a goal of EC$2000, but after this was not met at the end of November or December, he eventually decided to extend the project until January 3, 2018.