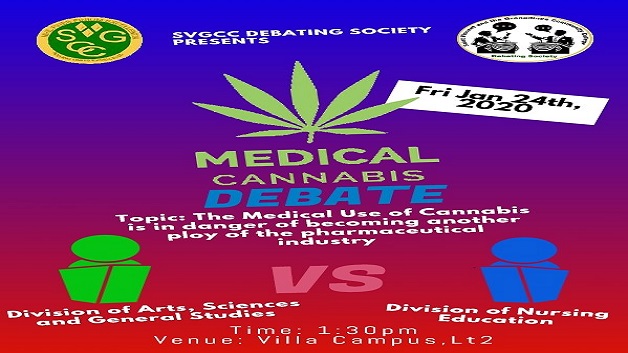 The St. Vincent and the Grenadines Community College (SVGCC), will be joining the conversation surrounding the medical use of cannabis.

The conversation will take place in the form of a debate, expected to be held on Friday January, 24, on the topic, “The use of medical cannabis is in danger of being another ploy of the pharmaceutical industry”.

Hosted by the SVGCC Debating Club, the event will see participation from students representing the college’s Division of Arts, Sciences & General Studies, and the Division of Nursing Education. Optimistic about the initiative, Director of the SVGCC, Nigel Scott lamented, that the SVGCC has a clear mandate, to prepare our students for the world at large.

Scott said the ability to speak clearly and think critically on topical issues is a part of that preparation, hence the College’s debating club is one way of preparing its students and they fully support their efforts.

Friday’s debate will see a specialized format, consisting of a first round team debate, then an individual component where students will address an impromptu topic.

The format was tailored to help judges select the strongest performers who will advance to represent the college in the upcoming Windward Islands Debating Competition, slated for March 5th – 8th in Dominica.

Friday’s event will take place from 1:30pm at the college’s Villa campus.