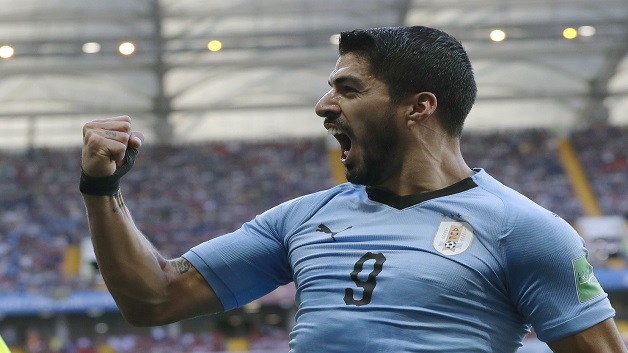 With a single goal, Luis Suarez settled the fate of four teams in the group stage of the World Cup.

The controversial striker, who was making his 100th appearance in his national team’s light blue, scored yesterday to give Uruguay a 1-NIL victory over Saudi Arabia and a spot in the round of 16.

The result, though, had a domino effect in Group A. It also put host Russia into the next round while eliminating both Saudi Arabia and Egypt at the same time.

Suarez, who was kicked out of the last World Cup for biting an opponent during a match, knocked in a corner kick from Carlos Sanchez in the 23rd minute for his 52nd goal for his country in that century of matches.

Uruguay and Russia both have six points from their opening two matches, putting them into the round of 16 with a match to go. They will face each other on Monday in Samara with first place in Group A on the line.

Meanwhile, Lionel Messi is under pressure to deliver when Argentina face Croatia today after his eternal rival Cristiano Ronaldo streaked clear at the top of the World Cup goal scoring charts.

The Barcelona forward had a first game to forget, failing to convert a penalty as the two-time world champions drew 1-1 with Iceland in their Group D opener.

In stark contrast, Ronaldo, who last month won his fifth Champions League winner’s medal, now has four goals in Russia and looks a shoo-in to win his sixth world player of the year award.