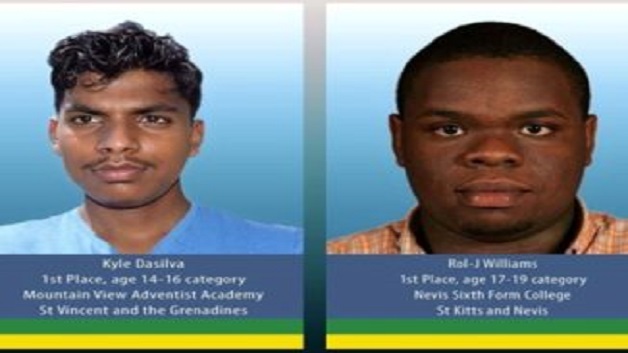 Kyle Daniel DaSilva of the Mountain View Adventist Academy here in St. Vincent and the Grenadines, and Rol-J Williams of the Nevis Sixth Form College, in St. Kitts-Nevis are the first place winners in the respective territories of the 2017 OECS Essay competition hosted by the Eastern Caribbean Central Bank (ECCB).

Kyle emerged winner of the 14-16 age category with an essay on the topic: Britain’s withdrawal from the European Union can negatively impact the economies of the OECS.”

Kyle asserts that the United Kingdom has been the principal target market for trade for the English speaking Caribbean, therefore the impending departure of the UK from the European Union in 2019 will result in the severing of the OECS’ only trade agreement with the UK.

In the 17-19 age category, Rol-J Williams of Nevis captured the top prize with his piece on the same topic. In his view, the United Kingdom’s exit from the European Union can negatively impact the open economies of the OECS by disrupting preferential trade agreements that have been established trilaterally with the once British-dependent states of the OECS, the United Kingdom and the European Union.

The OECS Essay competition, which is part of the ECCB’s Community Outreach Programme, is aimed at encouraging critical thinking and raising the awareness of secondary school and college students in the Eastern Caribbean Currency Union (ECCU) on issues of economic and social development.

Khadijah Halliday of the St. Joseph’s Convent Secondary School in St. Lucia and Tia Ashley Katrib of Christ the King High School in Antigua and Barbuda were the second and third place winners respectively in the age 14-16 category. In the age 17-19 category, Cheyenne Quinlan of the Sir Arthur Lewis Community College in St. Lucia took second place, while Jessica Prevost of the Dominica State College placed third.