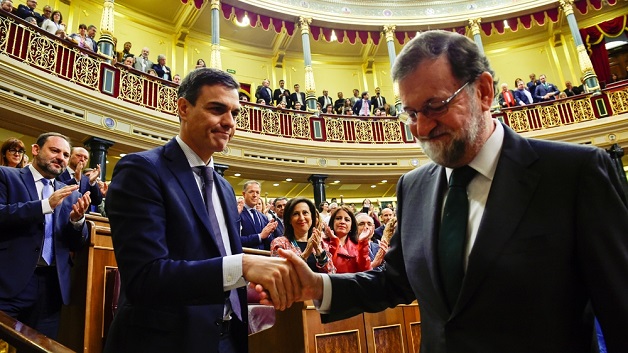 Spain’s parliament has deposed Prime Minister Mariano Rajoy in a no-confidence vote in Parliament sparked by fury over his party’s corruption woes, paving the way for a takeover by opposition leader Pedro Sanchez who had filed the motion.

An absolute majority of 180 legislators voted for the motion today, making Rajoy the first prime minister to be removed in a no-confidence vote since Spain transitioned to democracy in 1977.

Speaking before the vote, Rajoy appeared to have accepted his fate and congratulated Sanchez on his new position.

“We’re going to sign a new page in the history of democracy in our country,” Mr. Sánchez said ahead of today’s vote.

According to Al Jazeera News, the vote was triggered by a scandal involving Rajoy’s centre-right People’s Party (PP), which saw former PP members handed jail sentences this month for their part in the long-running Operacion Guertel corruption case.