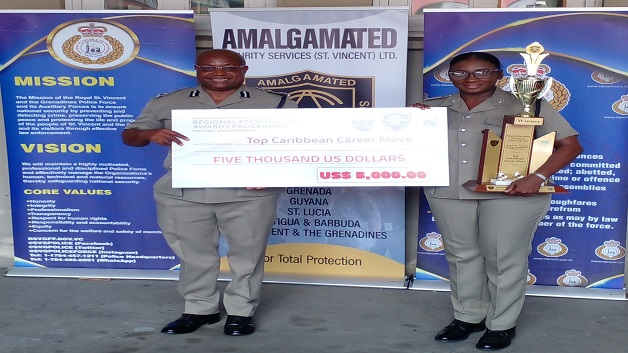 Commander of the Central Division, Superintendent of Police (Supt), Kamecia Blake of the Royal St. Vincent and the Grenadines Police Force (RSVGPF) is the recipient of the prestigious 2020 “Top Caribbean Career Move Award” for Public Law Enforcement from the Association of Caribbean Commissioners of Police (ACCP)/Amalgamated Security Service Limited (ASSL) – under the Regional Recognition Awards Program.

Superintendent Blake received her award on Monday 20th June 2022 during a brief ceremony at Police Headquarters in Kingstown.

Commissioner of Police Colin extended congratulations to Supt. Blake for winning the Top Caribbean Career Move 2020 Award and said he hopes that the nominees from RSVGPF for the 2022 awards would be just as successful.

Commissioner John also lauded the contribution of Amalgamated Security Services Limited to regional security and the long-standing partnership it has shared with the Association of Caribbean Commissioners of Police over the last eight (8) years in combating transnational organized crime – not only in individual countries but, regionally and internationally.