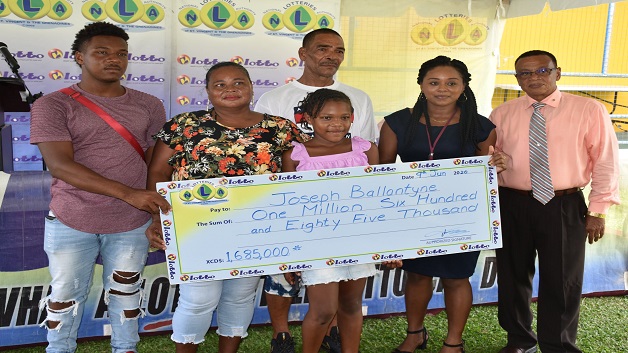 The cheque amounting to one million 685-thousand dollars was presented to the jackpot winner Joseph Ballantyne yesterday morning, during a presentation ceremony hosted by the NLA.

Ballantyne SVG’S First Lotto Jackpot Millionaire who won from Lotto draw dated May 29, 2020, signed the Winning ticket provided for viewing and says he is grateful to his daughter who gave him the winning numbers of the Lottery.

Speaking at the presentation ceremony, Project Development Officer at the National Lotteries authority, Anthony Dennie says it is an historic day in St. Vincent and the Grenadines.

He noted that the draw process of the National Lotteries Authority is transparent.

Sealey encouraged the newest millionaire in SVG to spend his winnings wisely.

The last jackpot prior to May 29th was won by Julian Olivierre of Bequia who won the January 15th 2019 jackpot.