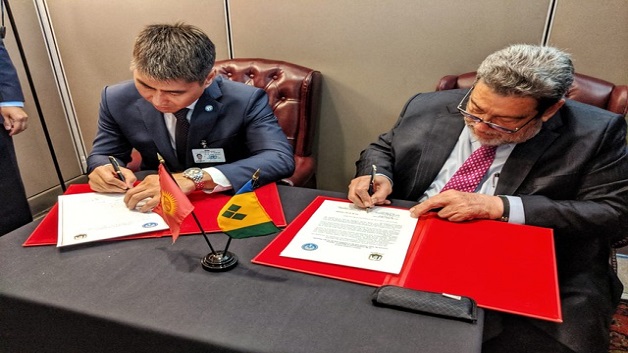 Three new countries have now been added to the list of diplomatic allies of Saint Vincent and the Grenadines with the signing of documents establishing diplomatic relations.

These developments occurred on September 24th, 25th and 26th, during the 74th Session of the United Nations General Assembly currently being convened at the headquarters of the UN in New York.

Prime Minister Dr. Hon Ralph E Gonsalves who is leading the local delegation attending the Session represented this country at the signing. On Tuesday September 24th 2019, this country established diplomatic relations with The Republic of San Marino, a micro state surrounded by north-central Italy.

The signing of agreement establishing diplomatic relations was done during a bi-lateral meeting between Prime Minister Ralph Gonsalves and the Foreign Minister of San Marino Nicola Renzi.

Members of both national delegations witnessed the signing and offered congratulations as the leaders displayed the signed documents. The bi-lateral meeting between Prime Minister Dr Ralph Gonsalves and the Ukrainian Foreign Minister Vadym Prystaiko, took place on Wednesday September 25th 2019.

During this meeting, Dr Gonsalves signed the agreement establishing diplomatic relations on behalf of Saint Vincent and the Grenadines with Ukrainian Foreign Minister Prystaiko signing the agreement on behalf go his country.

On Thursday 26th September, 2019 the Kyrgyz Republic (Kyrgyzstan) became the third country to establish diplomatic relations with Saint Vincent and the Grenadines.

The Joint Communiqué establishing diplomatic relations, was signed by Prime Minister Dr Ralph Gonsalves on behalf of this country while the Foreign Minister of the Kyrgyz Republic Chingiz Aidarbekov signed on behalf of his country.

The establishment of diplomatic relations with these new countries is a testament of the principled and progressive foreign policy of the government of Saint Vincent and the Grenadines that allows this country to engage nations regardless of their ideology.

The government and people of this country look forward to working with these new allies to advance the principles of the charter of the United Nations and working towards the achievement of global peace and security.

High Court Judge strikes out case involving teachers who resigned to contest the 2010...