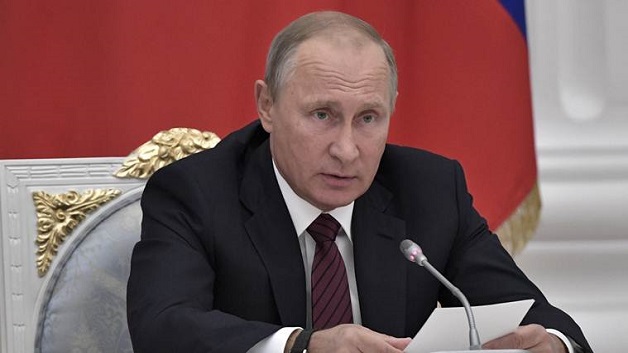 In a telephone conversation with his Iranian counterpart, Hassan Rouhani, Putin and Rouhani agreed that the Western strikes had damaged the chances of achieving a political resolution in the seven-year Syria conflict, according to a Kremlin statement.

“Vladimir Putin, in particular, stressed that if such actions committed in violation of the U.N. Charter continue, then it will inevitably lead to chaos in international relations,” the Kremlin statement said, according to Reuters.

US ambassador to the UN, Nikki Haley, told CBS’ “Face the Nation” program that the United States would announce new economic sanctions today aimed at companies “that were dealing with equipment” related to Syrian President Bashar al-Assad’s alleged chemical weapons use.

On Saturday, the United States, France and Britain launched 105 missiles targeting what the Pentagon said were three chemical weapons facilities in Syria in retaliation for a suspected poison gas attack in Douma on April 7.

The Western countries blame Assad for the Douma attack that killed dozens of people. The Syrian government and its ally Russia have denied involvement in any such attack.

The bombings marked the biggest intervention by Western countries against Assad and ally Russia.

WE FM - The Clean, Fresh Sound
Contact us: [email protected]il.com