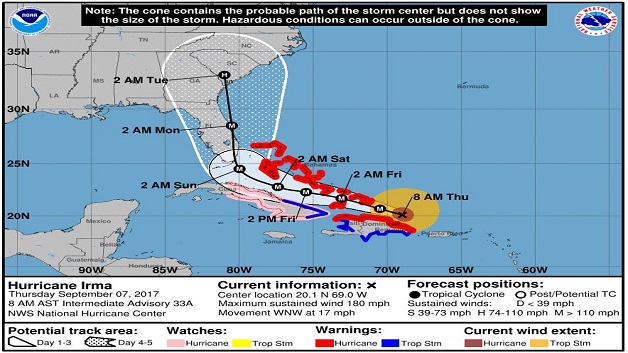 Residents of Barbuda are currently being evacuated in the wake of Hurricane Irma, given the fact that the island is being threatened by yet another storm: Hurricane Jose which strengthened to a Category Four storm today, as it followed in the path of Hurricane Irma.

The National Hurricane Center (NHC) said the storm, located in the Atlantic Ocean 480 miles southeast of the Leeward Islands, was packing winds of 125 miles per hour, as it moved northwest at 16 miles per hour.

According to the Antigua observer, over 300 Barbudans have already been evacuated to Antigua.

The individuals are being accommodated by family members, members of the public and in shelters.

The Government is encouraging senior citizens, disabled and infirmed persons to take advantage of the opportunity to relocate to Antigua. It was pointed out that should the twin island nation come under threat by Hurricane Jose, a mandatory evacuation order will be issued.

Antigua’s Prime Minister Gaston Browne said earlier that 90 percent of the island’s population of 1,500 has been made homeless as a result of the hurricane, sparking fear that residents do not have adequate shelter and supplies to sustain another storm.

Multi-gas measurements used to understand what is happening within volcano