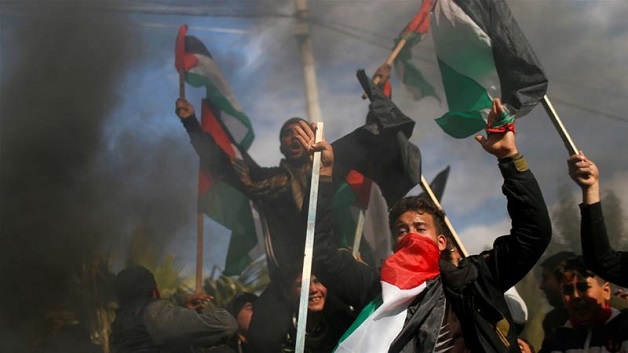 Thousands of Palestinians have rallied in the besieged Gaza Strip to protest US President Donald Trump’s imminent announcement of a plan to resolve the Israeli-Palestinian conflict.

Aljazeera News said in a statement, that raising a banner that read “Palestine is not for sale”, demonstrators today, burned photos of Trump and Israeli Prime Minister Benjamin Netanyahu.

More protests are expected after the US president announces details of his US-Israeli plan later in the day.

On Monday, Trump held separate meetings with Netanyahu and his election rival, Benny Gantz, in Washington, DC, over the long-delayed plan, dubbed the “Deal of the Century” which has been kept secret to date.

An Israeli military spokesman said troops had been sent to reinforce the occupied West Bank’s Jordan Valley, an area which Netanyahu has pledged to partially annex.

China threatens to retaliate over US sanctions

Texas pushes back against US Supreme Court ruling on gay marriage