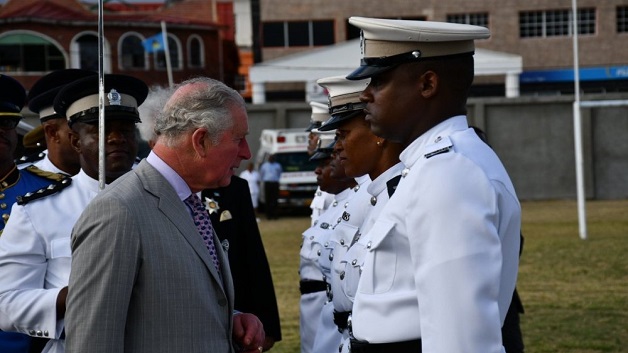 The Prince of Wales arrived in St. Lucia yesterday to begin the Caribbean Tour that will see him and the Duchess of Cornwall travel across six countries, one overseas territory, and the first royal visit to Cuba.

Prince Charles arrived in St. Lucia on Sunday afternoon to attend events marking the 40thanniversary of the country’s independence. He was received at the airport by Prime Minister Allen Chastanet and Governor-General Sir Emmanuel Neville Cenac.

Following the ceremonial aspects of his welcome, Prince Charles presented a Commonwealth Point of Light Award to Dorothy Phillip to honour her work in support of cancer patients and their families.

The Commonwealth Point of Light Award is awarded weekly to individual volunteers throughout the 53 nations of the Commonwealth in the lead-up to the 2020 Commonwealth Heads of Government Meeting in Rwanda.

Following the visit to St. Lucia Prince Charles and Camilla is expected to visit Barbados, tomorrow March 19th and on March 20th St. Vincent and the Grenadines. The Royal Tour of the Caribbean continues until March 29th with visits to St. Kitts and Nevis, Grenada, Cuba and the Cayman Islands.

Compost facility – constructed at a cost of 1.5 million EC dollars handed over...